In Pacaraima, FWB ‘s Center for Training and Reference receives action to relocate refugees and migrants in the labor market 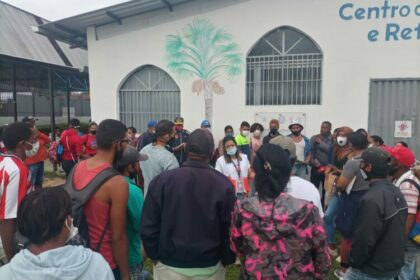 In Pacaraima, FWB’s Center for Training and Reference receives action to relocate refugees and migrants in the labor market.
The initiative had the partnership of World Vision (Visão Mundial) and resulted in the issuance of work cards and preparation of resumes for more than 100 people. 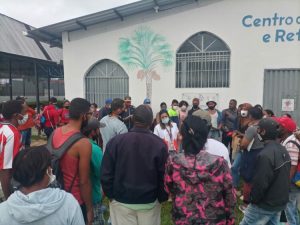 The Training and Reference Center (TCR), Pacaraima – RR, of the Project “Brazil, a heart that welcomes” (BHW), of the humanitarian and non-governmental organization Fraternity without Borders (FWB), carried out an action of insertion of Venezuelan refugees and migrants in the labor market. The initiative had the partnership of World Vision (Visão Mundial), through the project “Ven, Tú Puedes!”

During two days of service, February 22nd and 23rd, 125 people were assisted with the issuing of work permits, the elaboration of resumes, and the registration of these people with the Brazilian Social Security. An informative note about how the entrepreneurial market works in Brazil was also given to the participants.

“We had excellent service and I learned a lot here”, said Genesis Arnas, 26, who participated in the action and took the opportunity to watch a video about entrepreneurship in Brazil. So did Juliana Sera, 46, who said “it will serve me a lot from now on”.

The TRC is a strategic space, 100% funded by the FWB Project, with rooms for on-site training, with sewing machines, computers, and online courses. In addition, in partnership with Caritas’ Orinoco project, it offers free bathrooms, showers, and diapers to the population that comes from Venezuela and those who are already in Brazil but are in a street situation.

“Pacaraima is a place of transit, the people who were assisted are not going to stay here. Actions like these are very important because when they arrive in Boa Vista (Roraima’s capital), or if they are relocated to another state, they already have all the documentation ready and know a little more about how Brazil works”, explained Cristian Oropeza, coordinator of the Training and Reference Center. 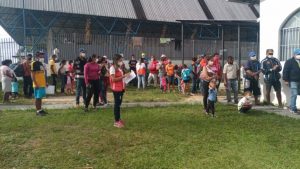 The “Ven, Tú Puedes!” project is a World Vision initiative, financed by the United States government. The activities are developed in Roraima-AM and São Paulo-SP, and in 2021 benefited around 40 thousand people. The actions are focused on four axes: employability, entrepreneurship, involvement of the private sector, and protection, with a focus on the prevention of labor violations. Among the courses offered are entrepreneurship, vocational training in several areas, and Portuguese.

About the Project “Brazil, a heart that welcomes” – The project was created in October 2017, after the significant increase in the migration flow from Venezuela to Brazil, via Roraima. At the time, thousands of Venezuelan brothers and sisters entered Brazil every day, legally and illegally, and arriving here they began to live in a situation of vulnerability, without a home and without food, on the streets, especially in Pacaraima and Boa Vista, where BHW’s fronts are located. Today, the project welcomes, in Roraima, almost two thousand refugees and migrants, with housing, food, protection services, activities for children and training for adolescents and adults. There are five work fronts, being three Reception Centers in Boa Vista, a Reference and Training Center in Pacaraima and the Interiorization Sector that operates in both cities. In a little over four years of operation, more than five thousand refugees and migrants have been assisted by the project and almost 1500 relocations have been carried out.

About Fraternity without Borders – FWB is a humanitarian and Non-Governmental Organization, headquartered in Campo Grande (MS) and operating in Brazil and internationally, with operations in eight countries, in some of the poorest places on the planet, with hope and a deep desire to help, end hunger, and build a world of peace. The institution has 74 work centers, maintains shelters, offers food, health, professional training, education, sustainable cultivation, construction of houses, and embraces projects for children with microcephaly and rare diseases. All the work is maintained through donations and mainly by sponsorship. More information can be obtained at https://www.fraternitywithoutborders.org 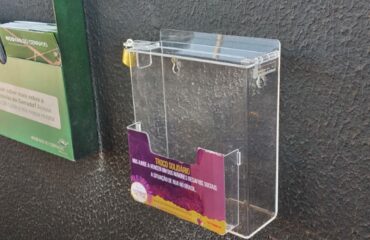