The young Antony Goméz, 20, walked 93 miles to get to Boa vista and today lives in one of Fraternity without Borders’ Reception Centers in Brazil. 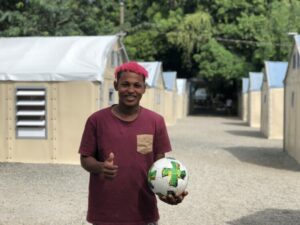 The scene on the photo is repeated daily. Anthony Gomés, 20, is a young Venezuelan athlete, now a refugee living in one of the Reception Centers of the “Brazil, a heart that Welcomes project, of the humanitarian and non-governmental organization Fraternity without Borders in Boa Vista, Roraima. The project is a partner of the UN Refugee Agency (UNHCR) and member of Welcome Operation, Brazil’s response to the Venezuelan humanitarian crisis.

He walks everywhere with the ball lent to him by the military who do the security at the site.  Where he lives, Host Center 13 de Setembro, 500 other Venezuelans are also trying to find a chance for a better life in Brazil.

In Venezuela, in the municipality of Anaco, state of Anzoátegui, Anthony was born, grew up, and started to be a base player for several teams. But he did not count on forced displacement as a consequence of the economic and political crisis in the country. “In Venezuela things are too hard. I used to play there, but everything is over. I decided to come here in search of this opportunity to play professionally,” recalls the young man.

The journey to Boa Vista was not easy. Anthony came with his cousin. From Pacaraima, the Brazilian border with Venezuela, it is 124 miles. They got a ride for only 37 miles, the other 87 miles they had to walk. Not to mention the trip from Anaco to Pacaraima, which was also done on foot over several days. It is now 1 year and 2 months in Brazil, a long road trip, and 8 months with the FWB.

The boy’s soccer skills draw attention. His hair also attracts attention and says a lot about the connection of the young Venezuelan refugee and Brazilian soccer. Neymar is an idol. “He came from the bottom just like me”, he explains. Anthony dreams of a brilliant future in Brazilian soccer, but one step at a time. For now he plays the Boa Vista Amateur Soccer Cup for the Santa Luzia team.

For now, the biggest challenge is to get soccer shoes the size of his foot, Brazilian number 40. The donation he received was a number 39 boot, and with it he has already scored many goals.

Everything he earns he sends to his mother and his two brothers who stayed in Venezuela. This is also why they have not yet been able to leave the Reception Center. 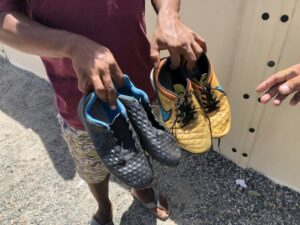 About the Project “Brazil, a heart that welcomes” – The project was created in October 2017, after the significant increase in the flow of migrants from Venezuela to Brazil, via Roraima. At the time, thousands of Venezuelan brothers and sisters entered Brazil every day, and when they arrived here, they began to live in a vulnerable situation, without a home and without food, mainly on streets of Paracaima and Boa Vista, where BCA’s fronts are located.

Today, the project welcomes, in Roraima, more than 2 thousand refugees and migrants, with housing, food, protection services, activities for children and professional training for adolescents and adults. There are 5 work fronts, being 3 Reception Centers (shelters) in partnership with UN Refugee Agency (UNHCR) in Boa Vista, a Reference and Professional Training Center in Pacaraima and the Interiorization Sector that operates in both cities. By sponsoring, you help to maintain these activities and to make new openings for those who are waiting for shelter. By being a Volunteer Host you can provide a new beginning for a Venezuelan family in Brazil. 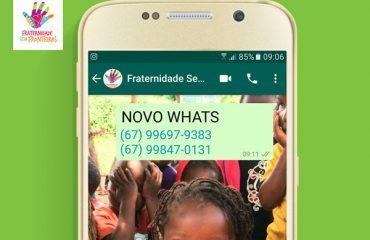